Commercial or private aircraft need a passport or identity card to fly. Hilarious? Ridiculous? The answer is neither for a means of identification is what registration of moveable property essentially is all about.  And like any type of seagoing vessel, aircraft is not bound to place of manufacture but to its operational headquarters. This basic premise, however, is much more than stating a legal requirement. For deciding where to register one’s aircraft unravels a list of legal, geopolitical and financial considerations which demand strategic thinking if one wants to make the optimum choice.

What renders Malta an ideal jurisdiction for aircraft registration?

A scrupulous legislation that incorporates the exigencies of the Cape Town Convention (aka the Cape Town Treaty) is the first attractive key factor, that is in turn augmented by the fact that Malta is an EU member state. In fact, Malta was one of the first member states to ratify the treaty on 1 October 2010 [Read ‘Malta’s Aviation Register Ensues Flying High’ for more comprehensive details].  Furthermore, apart from Maltese, the legal system in Malta is also written and conducted in English. The elimination of a language barrier plus factoring in the island’s convenient proximity to Europe, North Africa and the Middle East as well as a stable political climate point to three other significant advantages.

Fiscal benefits are an inevitable, crucial issue. Once again, Malta offers much more that its onshore EU jurisdiction. To begin with, Malta’s Aircraft Register is all-inclusive meaning it integrates both the the aircraft and mortgage registers. As a result, details of ownership, technical data and third-party rights over the aircraft and its engines are available in a one stop shop manner. Ratification of the Cape Town Treaty entitles clients registering their aircraft in Malta to the ‘Cape Town discount’ which translates into a reduction on their borrowing costs. Operational costs are also significantly lower than other EU countries. In addition, Malta is an EASA certified state and has an FAA Category rating, so that safety and security standards are of the highest level.

The main financial incentives to register aircraft in Malta:

The impetus to promote Malta as a regional aviation hub has also enticed the likes of Lufthansa Technik to open their MRO workshop and training centre here in 2002 subsequently followed by SR Techniks, MCM, Medavia and Bravo Aircraft Technical Services Limited. Their presence offers ample proof of Malta’s appeal for stakeholders in the aviation industry.

While it would be unfair and unrealistic to compare Malta’s Aviation Register with the unequivocal success of its shipping counterpart, registering one’s aircraft in Malta seals an excellent deal. 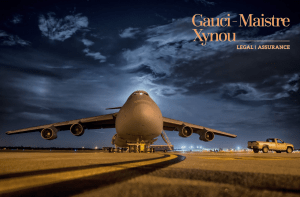 GMX has considerable experience in advising clients in the aviation sector.

The firm offers the following services in relation to Aviation:

For further information about how GMX can help you with your aviation law requirements kindly contact us.